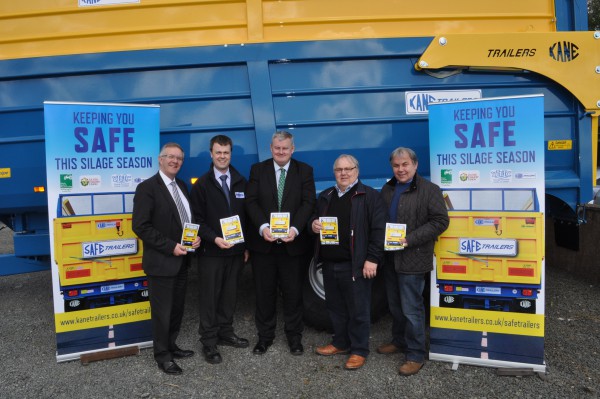 With silage season 2015 looming a safety campaign called Safe Trailers was launched today at the premises of Kane Trailers with the objective to promote the safe use of silage trailers during this coming season. The main action taken by the initiative is the publication of a leaflet outlining some of the Do’s and Don’ts regarding trailer use both in the field and on the road. This advice was produced by a cooperation of the Farm Safety Partnership(HSENI), Young Farmers Clubs of Ulster, Ulster Farmers Union and Kane Trailers. The initiative is a revamp of the previous trailer action programme that was run back in the early 2000s by the same partnership. The older campaign proved very successful but is now outdated due to the scale, speed and function of modern machinery design and practices. Therefore the relaunch of this as SAFE TRAILERS should be well welcomed within the industry.
This leaflet can be obtained at the YFCU stand at Balmoral Show this coming week and downloaded from www.kanetrailers.co.uk/safetrailers